Pizza Island lives! Our island has drifted across the sea to THIS NEW LOCATION. 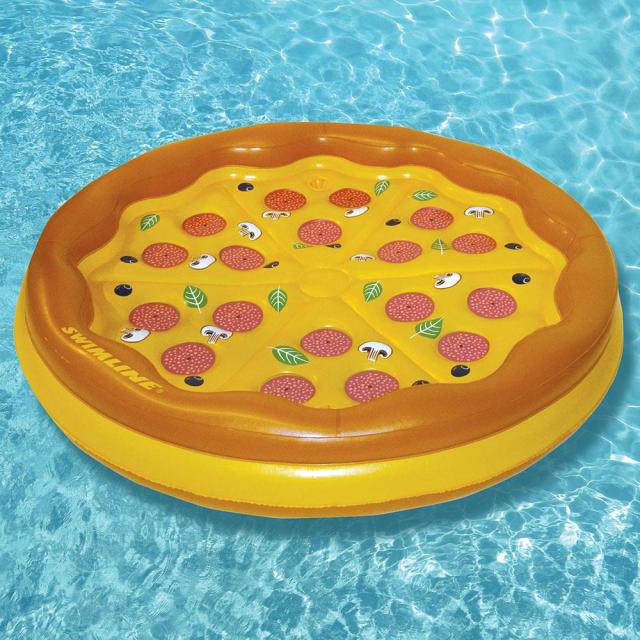 It is with much sorrow and regret that I, intrepid reporter and investigator Penelope C. Boner, am writing to report that Pizza Island, a famously exclusive all male studio in Greenpoint, Brooklyn, is closing down after two years of comics, pillow fights, fart jokes, barn dances, wizards, laughter, and an inordinate amount of screaming. I recently interviewed the girls of Pizza Island at their homes to find out what happened and where it all went wrong.

“I think the problems began when Domitille ate all my snacks, barfed them back up onto my desk, and then told me it was an art project,” claimed Lisa. Hanawalt lazily doodled a horse head in a heart before adding, “also, I was a toxic bitch and I tore our studio apart for my own amusement.”

In her defense, Domitille Collardey claimed that Hanawalt had forced everyone to give her piggy back rides up the stairs and whipped them with horsewhips when they didn’t pencil her projects fast enough. Collardey also suspected that “someone was hoarding snails in their filing cabinet” and she “didn’t like that.”

Julia Wertz also had a bone to pick with Hanawalt, claiming that Lisa had a parasitic twin named Ralph growing out of her back that would proposition her relentlessly. “I couldn’t take it anymore,” Wertz sighed. “I mean, Ralph was pretty cute and all, but I couldn’t figure out how the sex would work with Lisa just, like, right there all the time, and got tired of rejecting him.  Plus he was mostly just a mass of teeth and hair and I like holding hands so it would never have worked.”

When asked about the illicit events occurring at the Island, Sarah Glidden provided no comment, only saying, “I don’t have time for this.” As Glidden darted down the hallway, pencils and paintbrushes tumbled from her jacket pockets and clattered to the floor. “This is nothing!” Glidden yelled over her shoulder. “Don’t look at me!”

Not entirely satisfied with these answers, I dug a bit deeper into the rumors surrounding the Island and with a little sleuthing and a lot of grape gum, I discovered that Meredith Gran had actually tried to turn Pizza Island into an illegal, underground dog-fighting arena! And domestically challenged studio mate Sarah Glidden had been living in a tent under Kate Beaton’s desk since her return from France and it was becoming a health hazard. Speaking of Beaton, it was recently discovered that she had been smuggled into American inside an accordion case and was being deported back to Canada. On top of that, all the members had at one time or another claimed that they were fed up of smelling Hanwalt’s farts and that Wertz kept stealing all the pencils. Oy vey!

And so, after two years of being stuck on Pizza Island, enduring countless hardships such as being relentlessly mocked by a mouse that ate all the peanuts, the girls finally built a ship and have set sail for other lands! What comes next for each rogue islander? I asked and then they told me and then I knew the answers:

– Sarah Glidden is finally acting on her Bush-era threat to leave the country and is moving to France to live with the communists.  You can find her at sarahglidden.com

Domitille is establishing herself as a psychic sleuth – mysteries solved and return of lost belongings guaranteed – at domitille-collardey.com

-Julia Wertz has gone back underground to work on her interpretative dance of the mating rituals of root hogs. She’ll periodically resurface to post comics at juliawertz.com

Meredith Gran is pursuing the dream of reading an entire book from start to finish. After that she’s hoping to finish laying out her woman cave. Comics appear out of her mind on octopuspie.com

Lisa Hanawalt contributes regularly to The Hairpin and regularly updates her website with your worst nightmares: lisahanawalt.com

Kate Beaton is going to try knitting comics instead of drawing them and harkavagrant.com will pioneer this daring new form

and with that, we bid Pizza Island a fond farewell. God Speed, tiny captains!

Disclaimer: Pizza Island officially disbands at the end of January so please do not use the mailing address or group email listed on this or any other site as they are no longer valid. For information or contact info about any members, please visit their individual sites.

Sarah Glidden is selling a pack of prints of six superhero watercolor portraits: Batman, the Thing, Daredevil, Ghost Rider, the Silver Surfer and Thor. Each archival digital print is 5″ x 7″, perfect for framing and only $10! 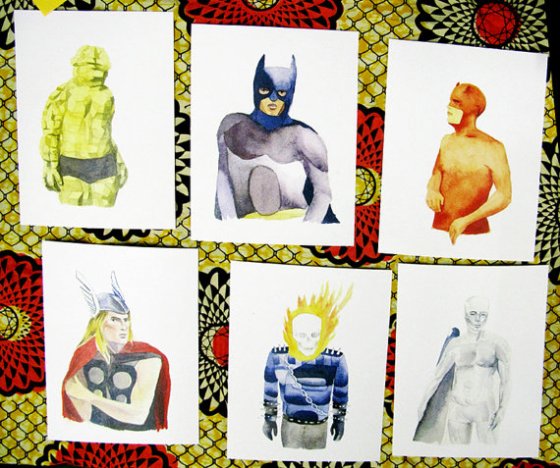 Julia Wertz is selling hand drawn comics panels for $15-$20, 6″x8″ (give or take a few) on bristol. And all her books are $5 off. Sale ends this Sunday so they’ll arrive in time for Christmas. 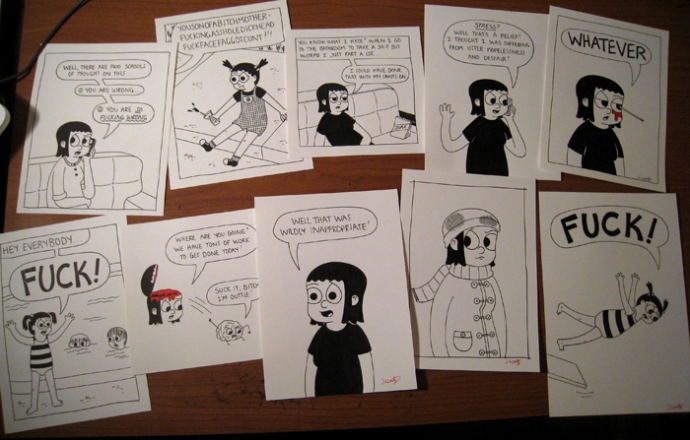 Lisa Hanawalt has prints and cards and original artwork galore for sale, including my favorite, the Anna Wintour prints. Original art is 10% off, sale ends Friday at midnight! 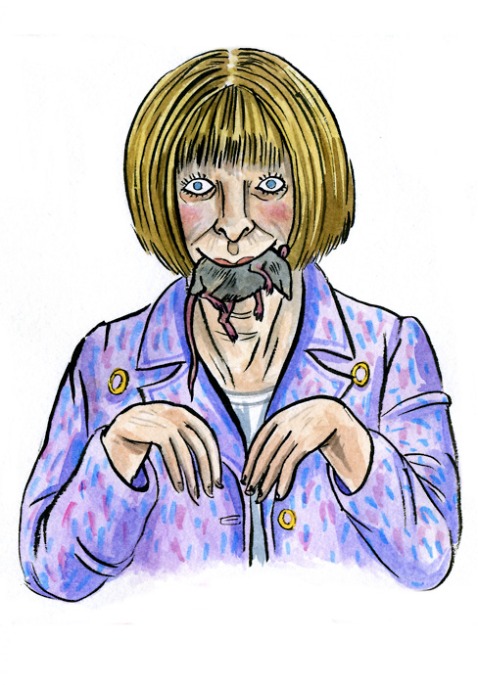 Oh hey, I remember this place. The Pizza Island blog! We were going to blog allll the time. It worked for a while. Then summer happened and it got so hot we all forgot our login info.

Anyway, I’ve been on tour for the past two months which was fun but also tiring. The very last stop was last weekend in Miami where I was part of the Miami Book Fair. While I was there, I headed over to Government Center to check out what Occupy Miami was up to. I did some interviews and sketches and the resulting piece is up today on Cartoon Movement. Click on the image below to check it out: 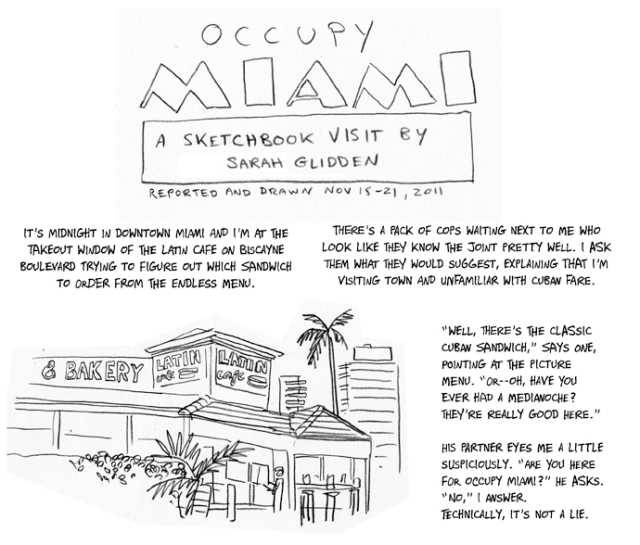 The original plan had been to just do some sketches of the encampment for Cartoon Movement’s ongoing series of Occupy Sketchbooks. But then I started talking to the people who lived in (or were involved with) “Peace City” and thought it would be a shame not so share some of their personalities, stories and thoughts on the movement. The result is not exactly a comic, but not just an essay either. I don’t know what to call it but it was fun to do. 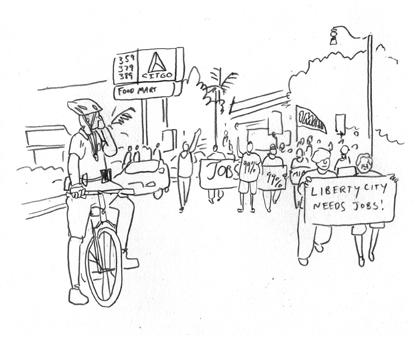 Almost all of the drawings were done on site except for some which I had to use photo reference to re-do because things were moving too fast. This was also an excercise in learning to make something quickly: I did all the reporting and drawing for the piece over two days in Miami (Thursday and Sunday) and wrote it on the flight from Miami to New York, putting it all together at Pizza Island, the first place I headed to once I was back in the city.

Anyway, its good to be back here. I get another month and a half of Brooklyn and Pizza Island before I move to Angouleme to start a 7 month residency so I’ll try to blog more often from now on. Promise!

Mike Dawson and Alex Robinson of our favorite podcast, Ink Panthers, interviewed (most) of Pizza Island on their last episode, seeking our advice for a dad who wants to connect with his teenage daughter over comics. I hope we helped! Also they demanded to know who the queen of Pizza Island is, forcing us to gossip, surely something that proper ladies never do. Give it a listen!

In my ongoing quest to squander time, here’s some sketches from various areas of Greenpoint, the neighborhood 4/6 of us live in and where Pizza Island is located.

A lot of these stores have pretty cool, old signs that drawing doesn’t do justice to. I tried image searching a photo of Steve’s Meat Market sign but got a picture of a hamburger shoved up someone’s butt so nevermind about that.

Word bookstore on Milton and Franklin: 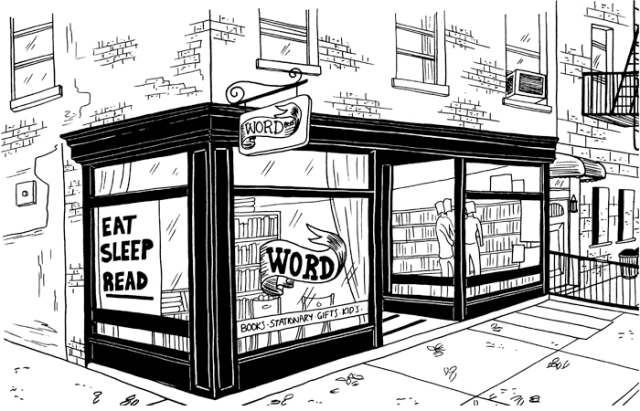 This Saturday the 30th our building is holding its semi-annual open studios. Some of us will be here at Pizza Island (that’s studio 2J on the second floor) so you can come by and check out the spot. Here are the details:

Where:  649 Morgan Ave between Nassau and Norman. Apparently there will be a “free shuttle” from the Bedford avenue L train stop and the Nassau G train stop if you call 646-938-6986. I think that pretty much means that you’ll be calling our landlord’s cell phone and he’ll come pick you up in his ’97 Corolla. It’s not a bad walk from the train either.

Some of us will have prints and artwork for sale.

Hope to see you there! 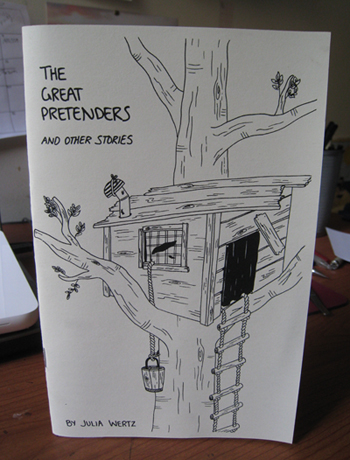 Hey pals! Just a quick note to let y’all know that I have a new mini comic for sale. It’s a 32 page collection of five childhood stories about imaginary siblings, death, sex, killing Jesus, nintendo, Chuck E Cheese, and flying monkeys. Please go to juliawertz.com for previews and purchasing options. I’ll also have it at TCAF in Toronto next weekend, May 7th and 8th, where I’ll be tabling with Sarah Glidden. Next week a few more Islanders will be posting about new stuff for sale as well.  Get out yer wallets, you beloved bums!

I’ve spent the past month and a half or so working on this 20 page comic on Iraqi refugees living in Syria. It’s now up to read on the Cartoon Movement site. Go read if you wish by clicking the image! Also, if you want to read a little bit about what went into making this, I wrote a little about it on the Graphic Journos blog here: http://www.graphicjournos.com/blog/ 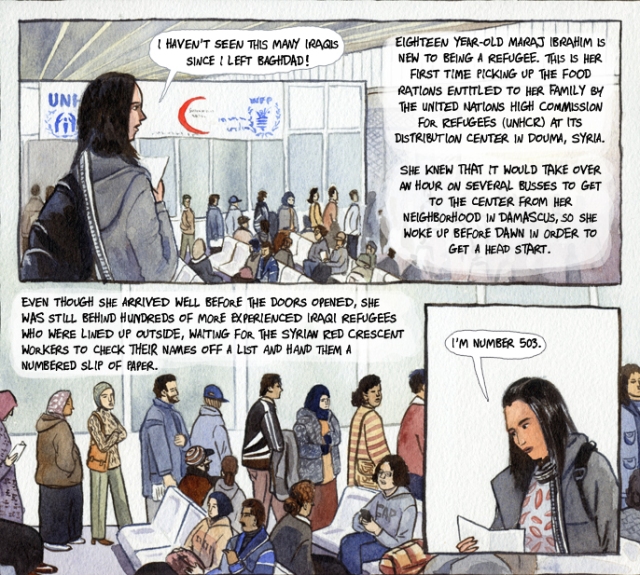 Pizza Island at the MoCCA Fest

Pizza Island is going to be in full effect at MoCCA this weekend! Well, no, I take that back. We will be in 5/6ths effect. Domitille is just weeks away from her deadline so she will be hard at work in the studio. But we will have copies of her minicomic–“What Happened Was”–for sale at our table (table M5) as well as: 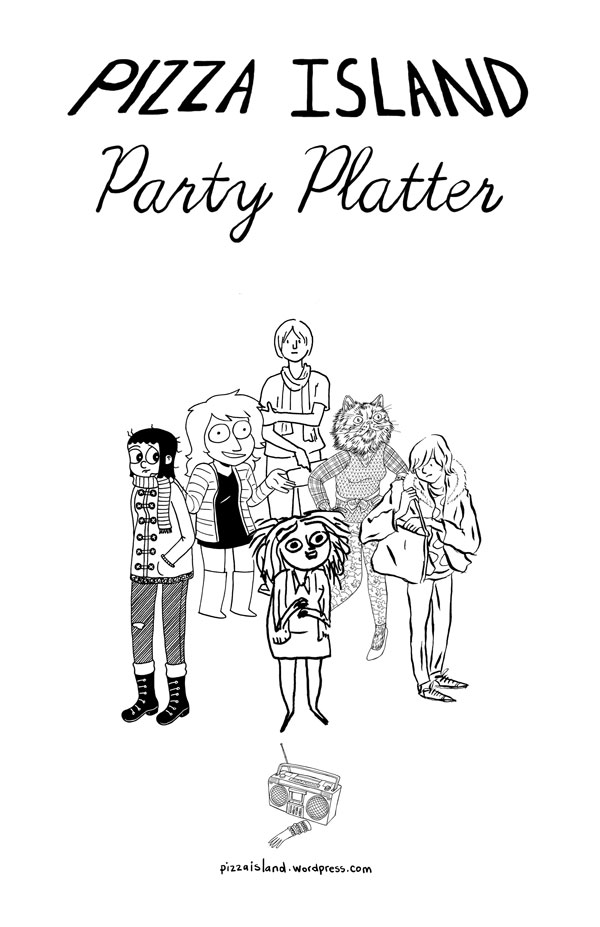 (we are listening to the Audiobook of Empowered)

Yes, we made a minicomic. Twenty eight pages of  little something special from each of us. We hope you like it!  Meredith, Julia, Lisa and I (Sarah) will also be selling books, prints and original artwork.

On Sunday we will steal Domitille away from her drawing table for an hour so that all six of us can be on our panel which is called “Pizza Island: The Panel.” Brian Heater will be moderating. That’s Sunday at 2:30.

Individual Islanders will also be participating in various other panels and readings. I will be part of a panel on non-fiction comics at 12:30pm on Saturday, and Lisa and Kate will be reading comics as part of a very special Carousel on Saturday at 5pm.

Come by and say hello!